Thank you for visiting the City of Millbrae's Water Utility Infrastructure webpage. Over the past year, we have looked at the state of our water supply and delivery system, and with significant input from the community, we are moving forward to modernize our aging system.

More information on changes to the City's water rates can be found in the City's report below:

The City of Millbrae provides water service to residents and businesses located within and adjacent to the
City. The City relies on imported water purchased from the San Francisco Public Utility Commission
(SFPUC) for 100% of the community’s water supply. Financially, the water utility is operated an
independent enterprise that relies primarily on revenues from water rates to fund the costs of providing
service. As such, rates must be set at levels adequate to fund the costs of operating and maintaining the
water system, pay for wholesale water supplied by the SFPUC, and fund necessary capital improvements
to keep the City’s aging water system in safe and reliable operating condition.

In 2016, the City retained Bartle Wells Associates (BWA) to conduct a water rate study. Key goals of the
study include recommending new water rates designed to a) recover the cost of providing service, b) be
fair and equitable to all customers, c) comply with the legal requirements of Proposition 218.

The City’s water utility is currently facing a number of financial challenges that will require significant rate
increases in upcoming years.

The City last adjusted its water rates in October 2017 due to substantial increases in the SFPUC’s wholesale
water rates, large declines in water sales due to conservation, and the resulting need to virtually eliminate
the City’s ongoing capital improvement program due to lack of available funding. Before the rate increase, the City was operating in deficit mode as revenues had fallen substantially below the cost of providing service.

Water was the topic of discussion as more than 50 people attended the July 11th Millbrae City Council meeting, sharing their support or opposition to the proposed water rate changes that would repair the City’s aging system.

“We have to fix our water infrastructure, but getting there is a challenge,” said Millbrae Mayor Reuben Holober. “We can’t keep passing this problem along. It will get worse and more expensive if we do nothing. That is not an option.”

14 residents spoke during the public hearing, expressing a variety of concerns with the cost increases and timing of the proposed water rate changes.

“I think we are late at this,” said one resident during the public hearing. “I think we should have started many years ago at increasing the rates in a more incremental fashion so that we wouldn’t have such a huge hit at this point. I think it would have been better to improve the system incrementally.”

Since 2013, the San Francisco Public Utility Commission has increased the City’s wholesale water rates by 67%. Because the City has not passed these rate increases to residents, funding reserves that pay for the system’s operations, repairs and upgrades have been depleted, and are forecast to run out by 2019.

“I think it’s clear the rates have to go up just to make the repairs and replacements that are needed,” said Mayor Holober. “What I’m not convinced on is that we have to fix the system at the work rate that has been proposed. Maybe we fix 2% of the infrastructure each year, and not 2.8%. That would help lower the monthly costs on residents.”

Following the public hearing, the City Council directed staff to bring back other options that would lessen the impacts of water rate increases on residents. Those options are expected to be presented in September.

During the 45 days of public comment prior to Tuesday night’s hearing, residents expressed concerns that water and sewer rate increases would push two-month billing above $500.

According to staff analysis, in 2021, if the current proposed rates are adopted, the average customer’s water bill is projected to increase to $106.80 per month. Compounded with other water and sewer rates, and assuming average usage, a monthly utility bill would increase to $192 per month, or $383 for a two-month bill.

The proposed increase would generate enough revenue to pay for wholesale water rates and allow the City to replace its water storage tanks and street lines, most of which are between 60 and 70 years old. The life expectancy of Millbrae’s water infrastructure is 50 years.

To read the entire water rate study, and learn more about the state of Millbrae’s water system, please visit: www.ci.millbrae.ca.us/waterutilityinfrastructure.

In addition, the City offers a Customer Assistance Program for Low Income Residents.  For information about this program, contact the Millbrae Water Department at (650) 259-2420.

1. Public Hearing to replace the Sanitary System Overflow (SSO) charge with the Clean Bay Charge.  In 2015; the City implemented a Sanitary System Overflow (SSO) charge included on bi-monthly utility (water and wastewater) bills.  The public hearing on July 11, 2017 proposes to replace the SSO charge with the Clean Bay Fee and modify the methodology for charging the fee to allocate costs between residents, multi-family units, and commercial users.

2. Public Hearing to increase water rates.  During the last few months, City Council and City staff have been working with the community to help them understand the current state of our water infrastructure, and solicit their feedback on proposed rate changes to water charges.  Rate increases are needed to pay for increases in the cost of water supply purchased from the San Francisco Public Utility Commission (SFPUC), eliminate budget deficits, and provide funding for critical infrastructure improvements and rehabilitation of the City’s aging water system.

Please click on the link below to download the presentation from the Third Water Utility Infrastructure Study Session.

On Tuesday, April 11, 2017, the City of Millbrae will be hosting its third Millbrae Water Utility Infrastructure Study Session.

Starting at 6 p.m., City staff will update members of the community and the City Council on the deteriorating financial condition of the Water Utility. In addition, they will discuss options to phase in water rate increases over a number of years to fund recommended infrastructure replacement options.

The study session is open to the public, and will take place in the Chetcuti Community Room (450 Poplar Ave.). 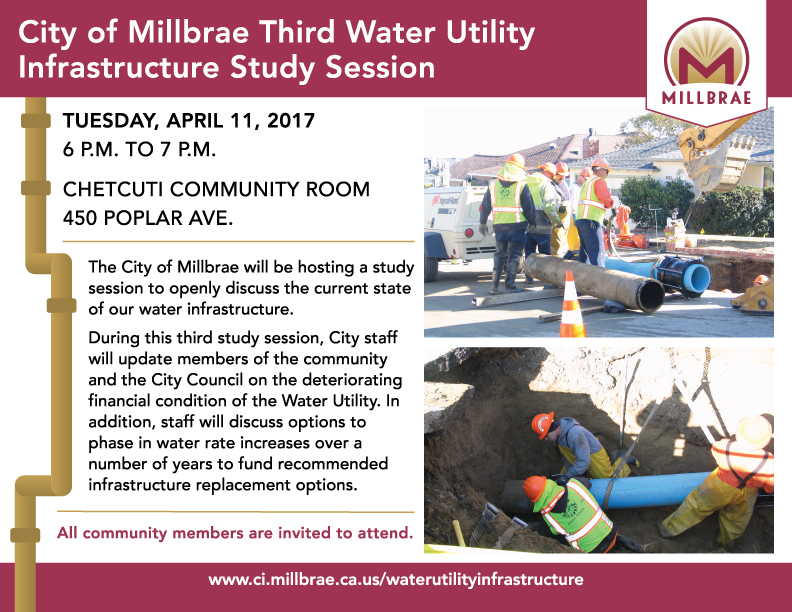 Click/tap on the image or text below for a copy of the presentation that will be discussed at tonight's meeting. 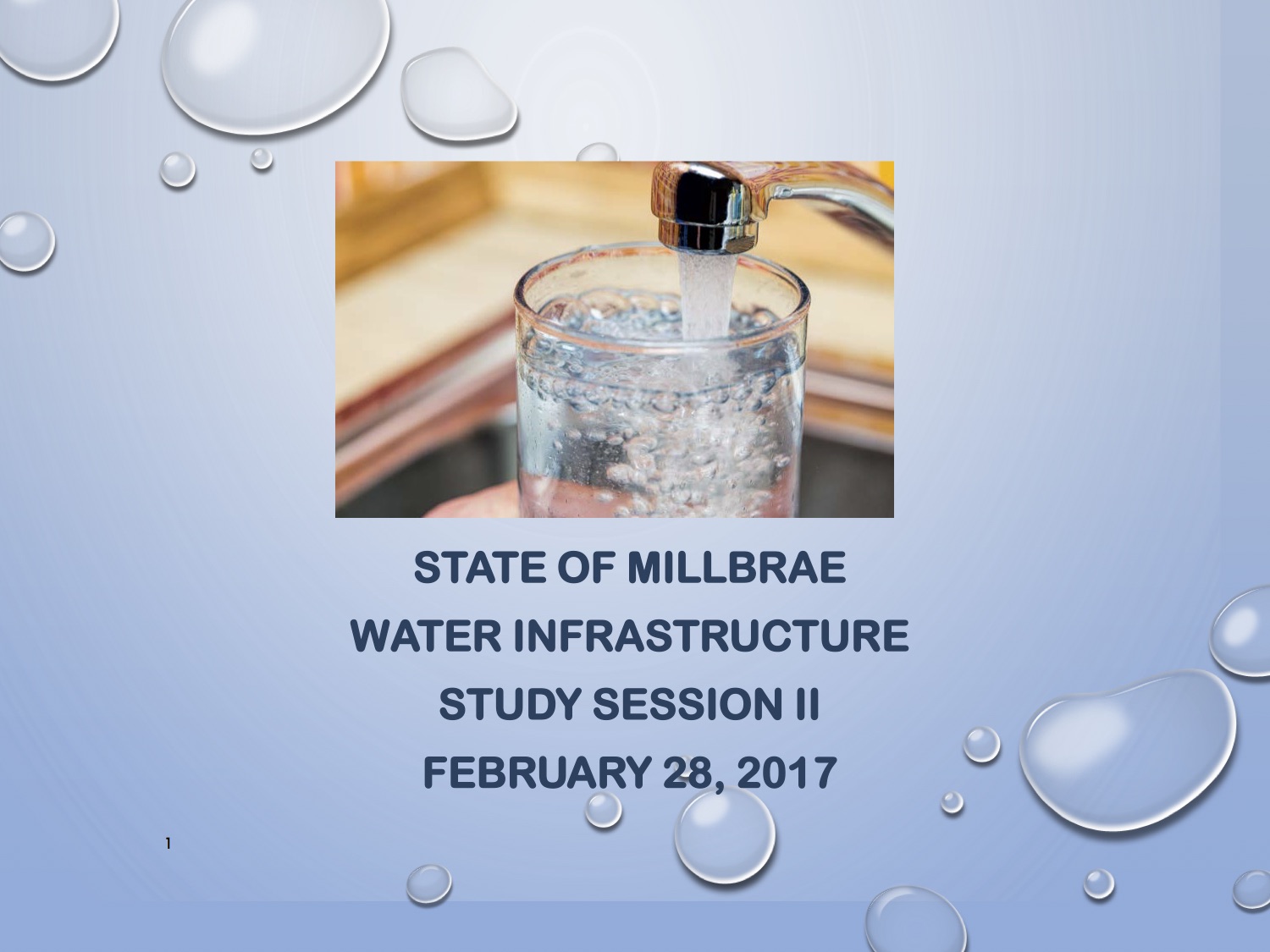 The City of Millbrae will be hosting its second Water Utility Infrastructure Study Session on Tuesday, February 28, 2017. Residents are invited to discuss the current state of our water infrastructure, building upon the ideas and goals from the previous meeting.

At this study session, the Public Works Department will present locations within the City in need of upgrades and describe how much of the water system has already been upgraded or replaced. This is an opportunity for the Millbrae City Council and community to learn more about the water supply and delivery system, provide input on how to improve it, and explore options the Council could consider to maintain the system into the future.

This event is open to the public. The meeting will start at 6 p.m. in the Chetcuti Community Room (450 Poplar Avenue) behind City Hall.

Last week, the Millbrae City Council, staff from the Public Works Department, and community members joined for the first Millbrae Water Infrastructure Study Session. During the open meeting, Millbrae Public Works Director Ray Chan spoke about the state of the City’s water system and challenges the department is facing in trying to maintain it.

“We have a 60-year-old water system. Most water infrastructure has a typical useful life of 50 years,” said Chan. “We are spending more than 40% of our funds on operations, maintenance and emergency repairs. This kind of emergency response is not sustainable and we need to start planning to gradually replace the system.”

Millbrae’s water system was primarily built in the 1950’s and 1960’s. Deficiencies in the system became apparent in 2013 when seven water mains broke at the same time, causing thousands of Millbrae residents to temporarily go without water until public works crews were able to repair the broken pipes.

“When a water main breaks, we are obligated to fix it within 24 hours. For many of our emergency repairs, they are only temporary fixes. A complete replacement would take weeks. It’s unreasonable to ask residents to go without water to their homes for that long,” said Chan in response to a question from a Millbrae resident. “A planned replacement schedule is more appropriate for the system, as it allows continued water service to be provided.”

Millbrae’s 75 miles of pipes provide clean water to 23,000 customers. Because of continual responses to breaks in the system and increased wholesale water costs, the City’s budget for long-term capital improvements has shrunk by more than 60% over the past 7 years.

“The major problem we are facing is the San Francisco Public Utilities Commission (SFPUC) has raised our wholesale water rates by 176%. Since we haven’t passed those increases on to our customers, we have significantly less funding to do permanent main replacements,” said Chan.

The San Francisco Public Utilities Commission (SFPUC) provides Millbrae with 100% of its water from a variety of regional sources, including Hetch Hetchy. In 2012, in order to address long needed attention to its own infrastructure backlogs and ensure reliable water sourcing, the SFPUC began a $900 million infrastructure upgrade to the Hetch Hetchy Reservoir.

Since then, in order to finance those improvements, the SFPUC has progressively increased its wholesale water rates for Millbrae and other cities in the Bay Area. Instead of passing these rate increases on to residents, Millbrae’s water utility is paying for these increases by deferring needed capital improvements.

In 2009, Millbrae used only 30% of its budget to pay for water from the SFPUC, leaving 70% of customer revenues to fund operations, maintenance and capital improvements. Today, it spends more than 50% for water purchases, even taking into account decreases in annual water usage, leaving fewer dollars for proactive capital improvements and system replacements.

“We need to shift from continual emergency repairs to preventative maintenance,” said Chan. “Public Works recommends replacing 2% of the City’s water pipelines each year over a 50-year period. This replacement rate can be increased to 4% or more, but the 2% rate reduces financial stress on the City and would lower the impacts of street construction interruptions on residents and businesses.”

At the City Council’s direction, the Public Works Department will host two more study sessions in the near future to review system repair options and funding needs. Times, dates and locations of those will be announced as they become available.

Millbrae Community Television (MCTV) recorded and produced a rebroadcast of the Millbrae Water Infrastructure Study Session hosted on Tuesday, January 24, 2017, at 6 p.m. in the Chetcuti Community Room. This meetings was open to the public.

On Tuesday, January 24, 2017, the City of Millbrae will be hosting a study session to openly discuss the current state of our water infrastructure.

During the study session, the Millbrae City Council and public will hear from the Public Works Department on the weakness of our current system, and the issues they are running into when replacing broken pipes and pumps.

This open to the public event will start at 6 p.m. in the Chetcuti Community Room (450 Poplar Ave.) behind City Hall. 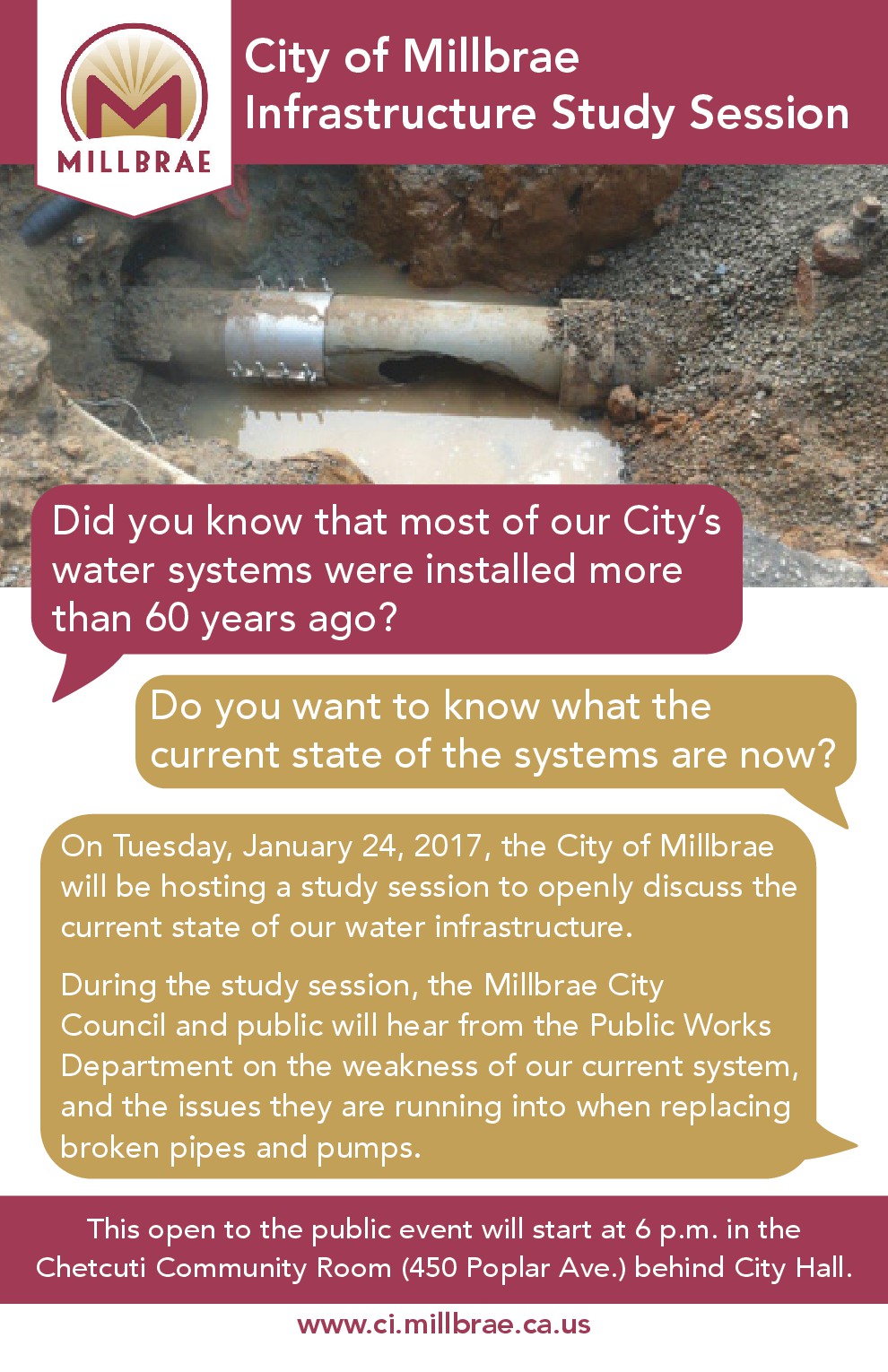