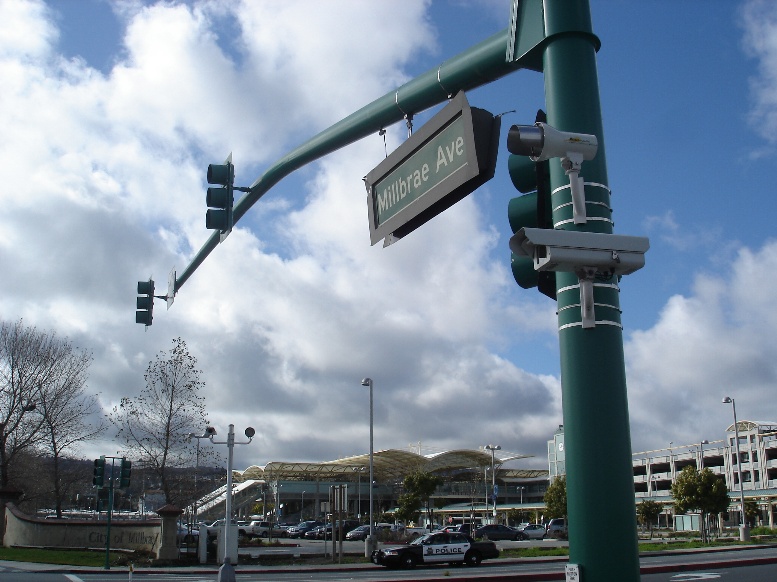 Questions or requests for information regarding red light photo enforcement issues should be directed to:

Where are the red-light cameras located?
The intersections with camera installations are listed below. Each intersection is marked clearly with signs.

How do the cameras work?

The driver face image is a close-up from the front image.

The Police Department reviews each violation event captured by the intersection safety camera system and makes the final decision to issue a citation. All flash incidents do not equate to a citation.

What to do if you receive a Notice of Violation

Why did I receive this Notice to Appear?
Based upon images captured by the automated system, your vehicle was determined to have committed a red-light violation. As the vehicle owner, the Notice to Appear is mailed to you.

How much is the fine?
Please contact the San Mateo County Superior Court for the fine amount.

What are my options?

What if I was not the driver/owner of the vehicle at the time of the violation?
Per the City of Millbrae you may request a hearing and submit an Affidavit of Non-Responsibility by mail. The Affidavit must be filled out accurately and in its entirety. You may obtain this form either by downloading and printing the form from www.ViolationInfo.com or visiting the Court in person. Bring the completed form to the Court in person on your hearing date.

What happens if I ignore the Notice to Appear?
You must respond by one of the procedures by the date on the front (see “WHEN”). If you do not, you may lose your license to drive, and your money penalties may increase.

Will I receive any points on my driving record for this Violation?
Yes, this is an infraction and your driving record may be adversely affected. Please contact the San Mateo County Superior Court for more information.

Will the road safety cameras take a picture of the driver of the vehicle?
Yes.

I do not believe I ran a red light. Where can I go to view my images and video?
To view video and images, logon to www.ViolationInfo.com and enter the Notice Number and the PIN Number located at the top right of your Notice to Appear. If you do not have Internet access, you may visit any public library for Internet access to view your images.

I do not believe I ran a red light and want to discuss my case with someone.
You may schedule a hearing by contacting the San Mateo County Superior Court.

I am Handicapped and unable to appear in court for my hearing. What do I do?
Please contact the San Mateo County Superior Court for more information.

Can someone other than me attend the hearing?
Please contact the San Mateo County Superior Court more information.

Is there more than one place that I can attend my hearing?
No, there is only one location. Hearings are held at:

How do I know that these violations are valid?
Images of your vehicle were captured and recorded by an Automated Intersection Safety System. You can review your images and video of the actual occurrence online. The images and video were reviewed by several qualified technicians and finally by the Millbrae Police Department before the alleged violation was affirmed and mailed to you as the registered owner or identified driver.

What company provides the red-light camera program in Millbrae?
The City of Millbrae has contracted with American Traffic Solutions Inc. (ATS)

Red-light Running is a Dangerous and Costly Problem.

A Crash Caused by a Driver who Runs a Red Light is More Likely to Result in Serious Injury or Death.

Most People Run Red Lights because They are in a Hurry, when in Fact They Save Only Seconds.