The City of Millbrae’s General Fund revenues for the 2015-2016 fiscal year out-performed budget projections by over $2 million; however, the City remains cautiously optimistic about its financial savings due to ongoing long-term infrastructure needs as well as the rebuilding efforts for the Millbrae Community Center.

On Tuesday, March 14th, the City Council received and accepted the Fiscal Year 2016 Comprehensive Annual Financial Report (CAFR). After emerging from the recession, the City has been proactively prioritizing long term budgeting and planning to weather any future economic downturns.

The 2016 CAFR indicated growth of general fund revenues with revenues increasing $1.9 million compared to fiscal year 2015. Transient Occupancy Tax (Hotel Tax or TOT) increased almost $750,000 (10%) from the prior year. Property tax revenues increased over $500,000 (6%). In addition, sales tax and franchise fees (typically charged to utilities for use of the City’s right of way) also increased moderately (approximately $100,000 each).

The top three revenue sources (Property Tax, TOT, and sales tax) represent approximately 77% of general fund revenues. These primary general fund revenues have steadily increased over time indicating economic growth, but the rate of this increase has declined as depicted in the following graph. 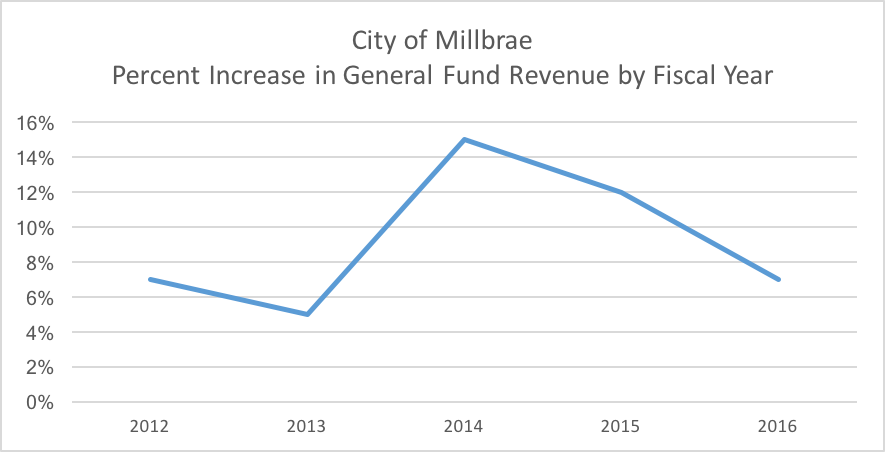 In addition to growth in General Fund revenue, General Fund department expenditures ended the year over $5 million below budget primarily due to deferred spending on capital projects. Further, staff coordinated with the State Department of Finance to reduce the budgeted State Controller-directed reimbursement to the Successor Agency to the Millbrae Redevelopment Agency from $2.3 million to $600,000. The difference of $1.7 million was retained in the General Fund.

“Over the past year, Millbrae has benefitted from increases in economically sensitive revenues and savings on one-time projects,” said Reuben Holober, Mayor of the City of Millbrae. “Moreover, our general fund reserve balance has amounts set aside for emergencies and economic downturn. The Council is focused on ensuring new growth and expansion in the upcoming year while remaining smart about our spending.”

Although Millbrae general fund revenue is projected to continue growing in the near term and the City plans on continuing its reserved spending trends, staff notes concern for longer term infrastructure maintenance, including the 60-year-old water infrastructure system. The water system’s needs have become more prominent as a greater number of pipes and sewer mains require urgent replacement. This is compounded by the necessary rebuilding of the Community Center after it was destroyed by a fire in July 2016.

“Both the aging water system and the Community Center rebuild project will remain key issues for the foreseeable future,” said DeAnna Hilbrants, Millbrae Finance Director. “Even though we have had a good year in a financial sense, we will need to continue closely watching our spending and budgeting methods so that the City can address infrastructure needs while maintaining a healthy reserve balance.  The City has a number of long term needs such as facility and streets maintenance that require attention to assure a sustainable city into the future.”

A portion of the total general fund balance has been allocated to the 2016-2017 budget primarily to fund the City’s efforts to replace aging infrastructure. Staff is currently evaluating recommendations for the utilization of a portion of the general fund reserve for one-time capital and infrastructure needs as outlined in the City’s Capital Improvement Plan, as well as for paying down long-term liabilities such as post-employment benefits.