Millbrae Reaches One Million Gallons of Grease Turned to Energy 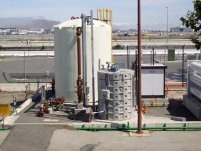 As of August 30, 2008 the City of Millbrae has turned one million gallons of waste kitchen grease into energy to power its Water Pollution Control Plant.  A press conference was held during Pollution Prevention Week to celebrate the one million gallon milestone. A brief video depicting the chain of waste grease from the restaurant to use as a clean energy source can be viewed here.

“One million gallons of grease is enough to fill 7,000 bathtubs to the top,” said Mayor Papan. “When you think of that much grease being kept out of the landfill and transformed into clean energy, it makes you realize the impact a single city can have in protecting our environment.”

Millbrae has been widely recognized as a leader in pioneering new technology that uses waste kitchen grease from local restaurants to generate clean power for its wastewater treatment plant. Its new cogeneration facility and grease receiving station, which began accepting grease in January 2007, features a wide variety of environmental and economic benefits.

• Produces 1.7 million kilowatt-hours each year from a renewable resource, reduces air pollution, and keeps waste grease out of the landfill.

• The $6.1 million project – plus ongoing maintenance, repair, and renovation – is entirely self-funding through reduced electric purchase costs and revenue from waste grease haulers.

With interest growing internationally in renewable energy, this state-of-the-art project has received considerable attention from diverse media sources as well as inquiries from other cities around the globe.  It was recognized with a 2007 Sustainable San Mateo County Award.