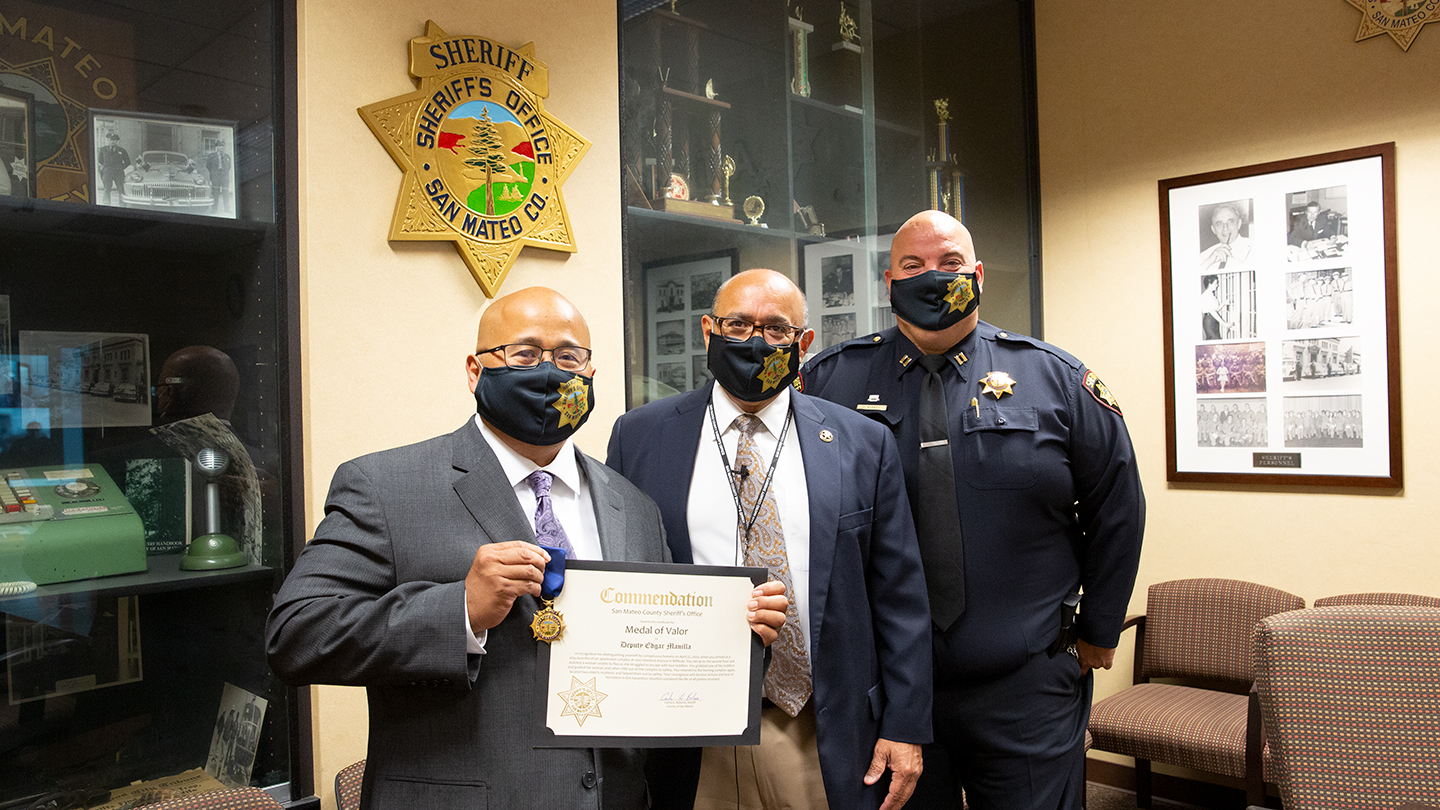 Because of Deputy Manilla’s bravery and distinguished service, Captain Paul Kunkel, Chief of the San Mateo County Sheriff’s Millbrae Police Bureau, nominated him for the Sheriff’s Office Medal of Valor.

As everyone arrived on scene it was hectic. Deputy Manilla, ran into the complex to help evacuate the residents as the fire fighters were arriving and organizing their efforts.  Deputy Manilla ran up to the second floor, where he located a woman struggling with two toddlers and not doing well.  Deputy Manilla described her as being stuck and unable to flee while holding the children.

Deputy Manilla grabbed one of the toddlers and guided the woman who was now carrying just one little one, out of the complex to safety.  As this was going on CCFD was dropping in hoses and attacking the fire on the third floor in earnest.  Deputy Manilla, the woman and the two little ones got hit with a wall of water while they fled as CCFD fought the fire.

Once the woman and two small children were safe, Deputy Manilla immediately returned to the burning complex without regard for his personal safety.  Deputy Manilla was able to locate and help two elderly residents out of the fire to safety.

As the result of these efforts, Deputy Manilla suffered from smoke inhalation and was rushed to Mills Peninsula Hospital code three in an ambulance for treatment.  I spent the afternoon in the Emergency Room with him, where he was ultimately admitted and spent two days getting treated.

Interestingly enough, this is Deputy Manilla's second save from a burning building.   In 2013, while working Coastal Patrol, he went to a house fire in Moss Beach.  He arrived with two other deputies before the fire department was there.  The deputies were told there were two little girls upstairs sleeping in the burning house.  All three deputies ran in, rescued both girls and the family dog, and all suffered smoke inhalation.  All three deputies (including Manilla) were awarded our Medal of Valor for that incident.

Deputy Manilla’s actions showed conspicuous bravery under hazardous conditions that enabled him to accomplish our mission of protecting life.  Five people got out of the fire that day, who might not have if not for the courageous, decisive action of Deputy Manilla.  Deputy Manilla represented himself, the Millbrae Police Bureau, and the San Mateo County Sheriff’s Office in the best possible light.”

Deputy Manilla’s bravery and selfless service have set him apart as a true hero. We thank him for his immeasurable dedication to protecting the people of Millbrae.